So I’m just going to miss out day one, as I pretty much covered it all in the review of the hotel and restaurant. On day two we had a good explore of Brasov old town, it is a beautiful little area with some stunning buildings even more enhanced by the snow cover. Like I said there was a beast of a hill between the hotel and the town which made for an interesting walk. Especially since Hannah made friends with a dog which chose to bark at us every time we walked past making her jump about 14 feet. 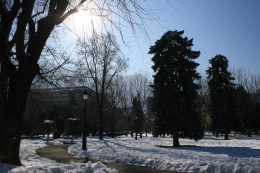 There are several park areas to wander around with various monument and statues to seek out. Well I mean most of the year round anyway, we couldn’t actually go into the biggest of the parks which plays home to the white tower. All the paths were well and truly frozen so they were more slip and slides rather than paths. In reality it was probably a question of practical foot wear and not expecting quite so much snow on our part. So… top tip research what the weather is going to be like and don’t just blag it like us. 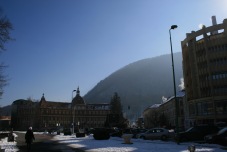 One of my favourite things about these little city breaks or getaways is the ability to get lost somewhere with just a camera and a rough idea of where you are going and just soak in every little bit of history and culture that the town oozes. We spent a whole day exploring Brasov and when we took the taxi the next day to Bran castle we realised we had still missed a whole bunch of Iconic buildings and monuments.

While having a potter about we stumbled across a small crêpe café called La Republique. Granted it was a Parisian style and yes we were in Romania, but it did th

e nicest savoury and sweet Crepes it came to be our go to café for lunch or a snack. In part because it was one of the few places that actually had good tea ask for black with milk on the side for am English breakfast equivalent. So if you find yourself in Brasov and fancy a nibble hunt it out just off the old town square.